Worldwide, the number of divorces between seniors is growing rapidly. Especially in Japan and Western Europe, but in recent years this new trend has also reached the Czech Republic. Experts see the main reasons for the ever-increasing divorce rate of this age group mainly in the changing lifestyle and more frequent dedication to hobbies and friends.

The main characters of the comedy play I want a divorce, grandpa! are members of the Weiss family - a 60-year-old saleswoman Kamila, a fresh pensioner Francis and their two children - a 35-year-old daughter, Jana, who is already a mum and still a free and thought-free thirty-year-old son David.

One day, when Francis reads his wife a news report about an eighty-year-old German pensioner who, after sixty years together with his wife, decided to divorce her, Kamila gets a similar idea! She wants a divorce to finally live after a fortieth year of marriage! Although Francis and their children do not agree, Kamila will enforce this decision.

Kamila is starting to meet unknown men, and even Francis is going to make similar meetings to get out of his unplanned solitude.

How will both spouses end up? What potential partners will they meet? Why does he see a bit of his former partner in everyone? And what will this interruption of their relationship show not only about this relationship, but about themselves?

Black sitcom I want a divorce, grandpa! with humor and irony it brings closer the present interpersonal relationships, where unfortunately the negative aspects, such as self-centeredness, short-term thinking and enjoying life at the expense of others, prevail. Tell yourself, can all of this ever end in a happy end?

The script of play is available in DILIA Agency.

The script of play is available in DILIA

A comedic story about the beginning of one seemingly simple relationship of two young singles.

Denisa is a young, free and extroverted businesswoman who works as a financial counselor.

Her younger sister, Aneta, is her exact opposite, because she is introverted, married, and has a young son. She is unemployed and works part-time as a courier on bike.

On the same floor of the house, right next to Denisa’s apartment, moves in Mrs. Weber, who is not a nice or easygoing neighbor at all.

Robert is a single young man who works in an advertising agency, likes to work out, most of all he enjoys running. On his run sometimes he takes his pal Tomáš.

One day, Denisa and Robert meet accidentally at a park bench. Denisa takes some time off to relax in the park one sunny summer day, as one of her business meetings got canceled. Robert is in the park, as per usual, running his daily dose of mileage. When Denisa finds Robert’s wallet in the park, which he lost during his run, they get to know each other, and sparks fly off from the beginning. And so they agree to meet later that day for dinner, where they both have a wonderful time. Two days later these young people want to go to a concert of a famous band, which is unfortunately sold out. Luckily, thanks to Denisa’s friends, they manage to get two tickets to this hot show. But one day before the concert, however, Denisa learns about the unexpected arrival of a foreign client, whom she cancelled meetings twice in the past. There is a potential of great contract, so it is no longer possible to renounce the third time. Therefore Denisa meets with Aneta and asks her to go to the concert with Robert instead of her. She tells her information about Robert and also gives her instructions on how to behave – to be more open, not as per her usual introverted self.

Aneta goes to the concert with Robert and from now on, the easy-flowing story of this play changes dramatically. The meeting at the concert will fundamentally change lives of Aneta and Robert, but also of Denisa, Mrs. Weber, Tomáš, and also Denisa’s ex Karel.

This dialog-driven sitcom contains a number of surprising plots, humor, irony, blunders, misunderstandings, and manipulation with the spectator’s perception of characters, as well as the whole story.

The script of play is available in DILIA Agency.

Lifestyle Hobby Magazine for Modern and Confident Women - Czech Television - About show The show is hosted by actress Eva Vrbková. It is aimed at smart and educated women in the Czech Republic living in towns and villages, women creative and of action. Important role on the show holds the space – a real…
more

This theater play introduces a real confession of Peter Freestone, former personal manager of Freddie Mercury, in an interview with the young journalist and singer Milan Šatník. 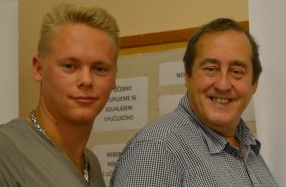 We live in a time where the media control the world - they have tremendous power and employ many talented and enthusiastic professionals, as well as many talentless scribblers. This multimedia theater play starts in the office of a tabloid magazine that focuses on the various excesses of celebrities, the wealthy or people of higher social spheres.

This office is also the workplace of the young and talented journalist and musician Milan Šatník. His knowledge, talent as well as his ambitions in the music industry are high, but thanks to the chief editor he has no opportunities to get to the star bands that visit the country for their sold-out megaconcerts. His journalistic work only involves regional articles about the best products of local businesses, the achievements of agricultural cooperatives, articles on senior gatherings and anniversaries, and other non-musical topics. His attractive colleague Gabriela, however, gets tasked by the chief editor to prepare interviews with the likes of Robbie Williams, Kiss, Lady Gaga, and other music icons of the world. Gabriela likes doing these interviews, as they allow her to take selfies with these music celebrities, about whom she knows nothing, however, since she does not understand music at all. This is why her interviews look what they look like. Which is of concern to the chief editor only until Gabriela enters his office wearing a mini skirt and a revealing cleavage. It is obvious she is able to wrap her supervisor around her finger.

Milan has been thinking about quitting for a long time, and one day he finally does it. The last straw is Gabriela’s departure to an AC/DC concert in the O2 Arena, while he goes to Čerčany, to a local senior club Zoubek to write an article about its anniversary. As a young journalist, singer and musician, he wants to do a job for which he was born, for which he lives with all his heart, and not a job anyone could successfully do, one that is just a job and not a mission. He goes to see the chief editor to quit and after a resulting fight, silence engulfs the office. When Milan is about to leave the office, the chief editor remembers the time he was in Milan’s age – also as impulsive and passionate – and gives him a unique opportunity: To write an interview with Peter Freestone, who was the personal assistant of the world legend Freddie Mercury and who has been living in the Czech Republic for the last fourteen years. Milan is surprised but immediately excited, for Freddie was and is his greatest musical idol. He accepts the offer instantly! The chief editor gives him Peter Freestone’s contact information and tells him that if the article is a success, he will be the one to write all the next music articles in the magazine.

This theater play does not only include an interview with Peter Freestone that takes place in an old coffee shop purchased by the tabloid magazine, but also live signing by Milan Šatník, a video projection, retrospectives, and finally a concert performance by the Ultimate Rock Show project.

The uniqueness of this play lies in the personal participation of the two real-life characters who play themselves. Peter Freestone as a world celebrity and guest of the interview and Milan Šatník – Eastern Bohemian singer with worldwide references (USA, South Africa, United Kingdom, Netherlands, Switzerland, Turkey) who is interested in a career his native country.

If you want to play this game at your theater or other cultural institution, please contact MUSICASE Agency  Thank you.

No comments by admin yet.