The script of play is available in DILIA

The story of this play captures Freddie Mercury during his fictional last interview. In the company of a well-respected journalist he remembers his life of a rock star, but above all his personal life, which was so different from what was published by the media. 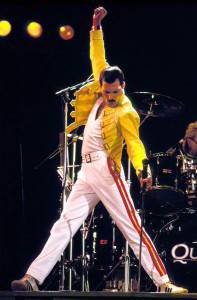 The first part of the play shows familiar things from Freddie’s life, from his childhood to the rock-opera duets in the late eighties. Freddie answers the journalist’s interesting questions, puts things into perspective, and occasionally comes into contact with a younger version of himself. During the interview, the most important people of Freddie’s life appear on stage – love of his life Mary Austin, personal assistants Paul Prenter and Peter Freestone, German star Barbara Valentin, the notable Spanish opera singer Montserrat Caballé, and last but not least his life partner Jim Hutton.

In the second part of the play, Freddie himself takes turn in speaking, as he wants to tell the journalist things that he has never told to any media. He knows he is seriously ill with this new AIDS sickness, and he does not want to hide anything nor avoid. At the same time, in these moments, he looks at his life as one of a higher purpose now and still wants to pass his positive energy to his fans. Because that’s exactly who Freddie Mercury was all along!

This theater play shows, especially thanks to the memories of Peter Freestone, the real life of Freddie Mercury as he experienced it – on one hand as a rock star closely watched by the media, on the other, from the position of an introverted man who liked his friends, fans and all of his life. A man who was able to enjoy life every minute of every day.

View all posts by: admin